When I moved to Detroit in 1984, folks gave me this welcome pitch:
“This city has nowhere to go but up!”

Not so. The abyss seems to have grown deeper as the city totters on the edge of bankruptcy. When will the city’s 700,000 die-hard residents get a little dose of hope? 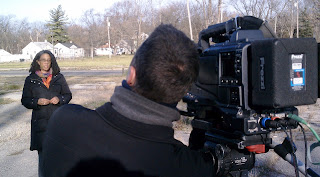 That’s what the Detroit Works project was supposed to be about.

In September 2010, the Mayor’s office set upon an aggressive plan to rework the city so that it makes sense, economically and socially.

The project quickly hit major, predictable speed bumps, especially given the mayor’s inability to supply what any aggressive plan for change must have — charismatic, strong leadership.

Instead, the process bogged down in Balkanized squabbles. Residents openly rebelled during town meetings. Department heads kept getting fired or quitting, making it impossible to hold people accountable, or even to achieve a semblance of continuity.

In July of 2011, the project was reshuffled. Maybe instead of tackling the issues citywide, it was more prudent to start in smaller, demonstration areas. The idea was to select patches of the city where steady, transitional and distressed neighborhoods co-existed and focus city resources on strengthening those areas 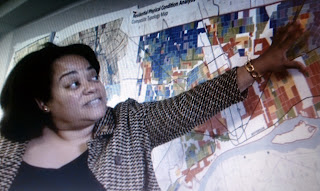 This fall (2011) when I talked to Karla Henderson, the Mayor’s Group Executive of Planning and Facilities, she made it clear that the demonstration projects didn’t mean that City Hall was giving up on the rest of Detroit.

Everyone’s trash was still going to get picked up.

The difference was that when it came to public subsidies for housing or commercial projects, the city was no longer going to spread its thin resources outside of the demonstration areas where the real effect of development could be felt.

What did that mean for the city’s outliers?

When unveiling the short term plan, Mayor Bing said, “We will not force anybody to move. We’re hopeful that we can create the right kind of environment, the right kind of amenities, the right kind of services that people will want to move into an area where they know it’s going to be strong and they can get city support on an ongoing basis.”

But when I talked to organizations like the Lower Eastside Action Plan (LEAP) and the Brightmoor Community Council, I found many well-educated activists who’d done their own action plans.

They weren’t buying into density as the key to Detroit’s revival.

I remember talking to LEAP’s Khalil Ligon while standing in a gigantic, empty field alive with the sound of crickets. She said to me that they city is thinking about neighborhoods of streets lined with houses. But maybe someone on the eastside wouldn’t mind having an apple orchard next door, instead of neighbors. 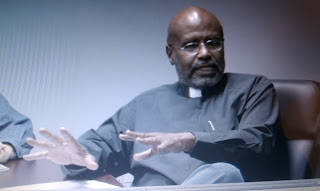 On the west side, Rev. Larry Simmons is the pastor of Baber Memorial A.M.E., and he also sits on the Brightmoor Community Council. He outright rejects the notion that the value of an urban community is determined by its density. “What’s the least dense community around here?” he asked. “Bloomfield Hills. Nobody’s talking about re-densifying them.”

Instead, many in these outlier neighborhoods believe that through cohesion and asset-based development, the city can accommodate all kinds of lifestyles – rural, suburban and urban -within Detroit’s borders.

There are those in Brightmoor who actually call their sparsely-populated neighborhood that’s dotted with community gardens, the “Brightmoor Farmway.”

But with few resources, neighborhoods from Palmer Woods to Yorkshire Woods aren’t waiting for anyone to ride in on a white horse.

This has always been a DIY town, and now more than ever, the survival of Detroit is going to depend on what neighborhoods can do to help themselves.

This is part of the Detroit Works series. Desiree’s full report aired on The PBS News Hour in December 2011. It was produced at WTVS, Detroit Public Television. To see the full report, click here.

For more from Desiree, go to www.detroitsnob.com.

Desiree Cooper wears her Detroit pride like a badge, in fact, she's created the ultimate 'celebrating the D' flag with her Detroit Snob line of apparel. Being a Detroit Snob trumpets, "We refuse to explain Detroit or apologize for it anymore!" Needless to say, her wares have become quite the hot ticket. For 25 years, she's lived, worked and raised a family in Detroit. As a resident, she came to love her adopted city. As a journalist, she came to understand it. Click here to read more about Desiree
View all posts by Desiree →

← Weaving Community: Meet the Shetroit Blog Team!
They Giggled. I Knew Why. →

Are you not on this list and should be? Drop us a line